John joined Knowldale in the late 1950s and was elected onto the Committee in May 1962 - he served as a committee member for fifty-two years.  By the mid-60s he was competing at the top level on International rallies in the company of works teams and other Knowldale notables such as Mike (Sutty) Sutcliffe and the Reverand Rupert Jones in a works Sunbeam Tiger.  (The attached picture shows John and Rupert after their successful outing in a Mini on the 1965 Danube Rally - 2nd Overall and 1st in Class.  More pictures here.) 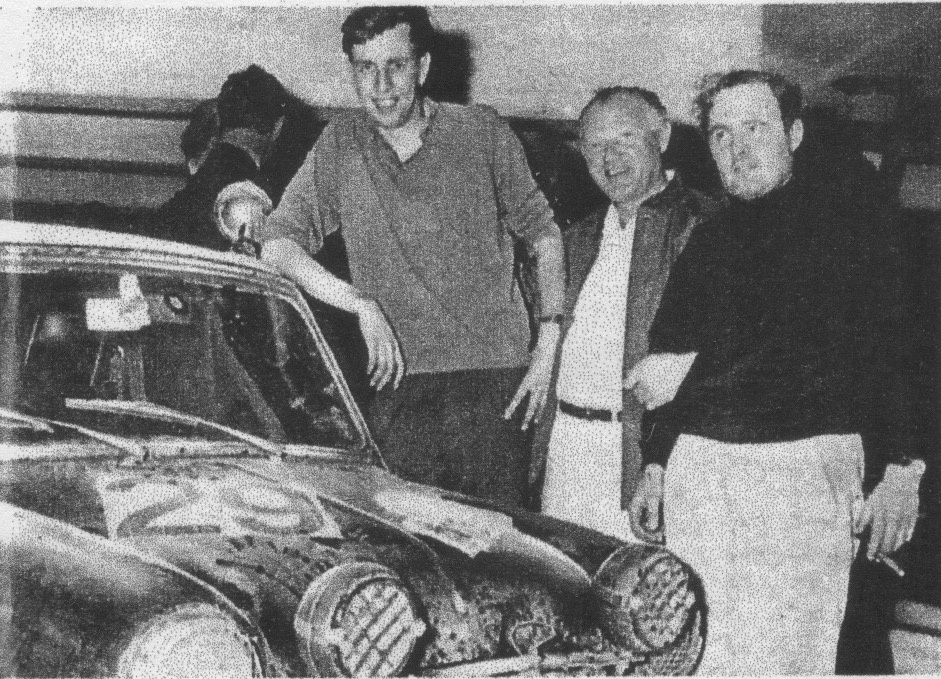 John was Clerk Of Course for Knowldale's Mini Miglia Rally in it's early years and witnessed Pat Moss/Stuart Turner giving the Mini it's first competition victory on the 1959 event, and Roger Clarke/Jim Porter winning in 1971 in the new Escort Mexico.  By the mid-70s Road Rallying was coming under increased pressure from outside bodies, and John was a member of the ANCC working party which devised a set of guidelines for road rallies which became the basis for those adopted later by the RACMSA.

From 19?? John was the club's Honorary Secretary and served as president of Knowldale in 1970. At the KCC 50th Birthday Dinner in 2002, at the will of the committee, he (surprised) was elected President once more, to the delight of the assembled throng.

In the early 70's John bought a Volvo 122 to prepare for stage rallying.  The Scottish, Welsh and RAC rallies were regular events for John in the 1970s, but on at least two occasions his rallying exploits took an unusual turn when his was one of a team of three volvos entered in the Caravan Rally, a feat repeated in 1975 as he partnered Colin Grewer in a Wolseley 2200. 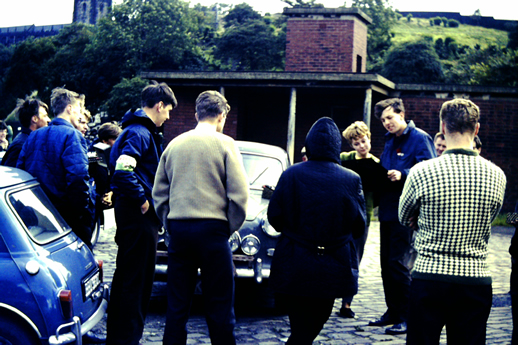 The Knowldale Magazine of July 1975 reported on his entry in the Tour Of Britain with John Handley in the Colliers Of Birminhgham Dolomite Sprint - John leading by half a lap at the Silverstone race when the engine blew up.  This was their fourth attempt at the event, first in an Alfa 2000 GTV followed by the Dolly Sprint. In 1973 they were 3rd overall and won the team award in the Alfa. In 1974 they won their class and were 4th overall in the Dolomite Sprint (further discussion here.)   The same issue carries the story of his entry on the Welsh International in his Volvo with Mike Sutcliffe, finishing 78th after a major 'off' on Stage 2 and an incident with a sheep on Eppynt.

John had a large hand in organising Knowldale's 25th Birthday Party in August 1976.  This was held at the Belgrade in Oldham in conjunction with Ecurie Cod Fillet, and a reported 18 British Rally Champions along with a strong contingent of KCC members were in attendance to witness and partake in the shenanigans.

The somewhat tired Volvo 122 was later replaced with a left hand drive 142. Having married kath in 1978, John decided to take an entry on the East African Safari Rally as his honeymoon. Colin Grewer stepped in when Sutty was unable to take the co-driver's seat, but their event ended early when the fuel tank parted company with the car.

By the early 1990s John had taken on the role of Treasurer to KCC whilst continuing to act as Honorary Secretary. Members who attended the AGMs presided over by John will long remember his presentation of the Balance Sheet interspersed with 'Oodles, Noodles and Whatsits' and 'Stamped with elephant's foot dipped in treacle.

A mark of John's thoughtfulness and support for members and a sign of his integrity was the organisation in 1994 of a Motor Sport Presentation at Milnrow Cricket Club where KCC sponsored the cricket match and put on a display of cars for potential sponsors.

At the Dinner Dance in 2000, John was presented with a Lifetime Achievement Award by the club in well-deserved recognition of his motorsport career and his contribution to Knowldale and its members.  He most likely already had in mind the preparations for Knowldale's 50th Birthday Dinner, which he organised and which was held at the Reebock Stadium in Bolton and attracted members old and new from far and wide.

With several coats of hindsight, you would say that the whole project (the Safari Rally) was ill-advised, but this was the measure of John, he would never take “can't be done” as an answer. During his life he would always have a go at whatever the next project happened to be, and a more generous and entertaining friend you could not wish to have. Any time spent with John left you feeling happier than before, and his passing will leave a large hole in everyone's lives. 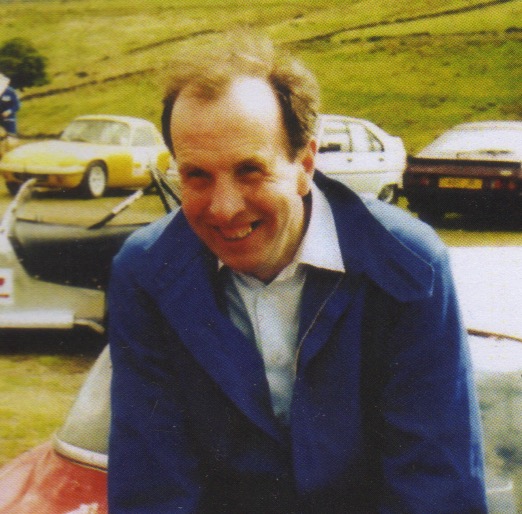 The photograph to the right of John with a Ford Zodiac rally car has recently arrived with us via Sarah Clegg (John's daughter.)  It was sent to her by Jim Porter (RIP) with the following description:

"It was at the end of the 3 Cities (Munich-Vienna-Budapest) Rally October 1969. Ford wanted to promote the Zodiac via competition success & British Vita Racing got the job. We won the class but were about 14th overall - end of promotion of Zodiac! 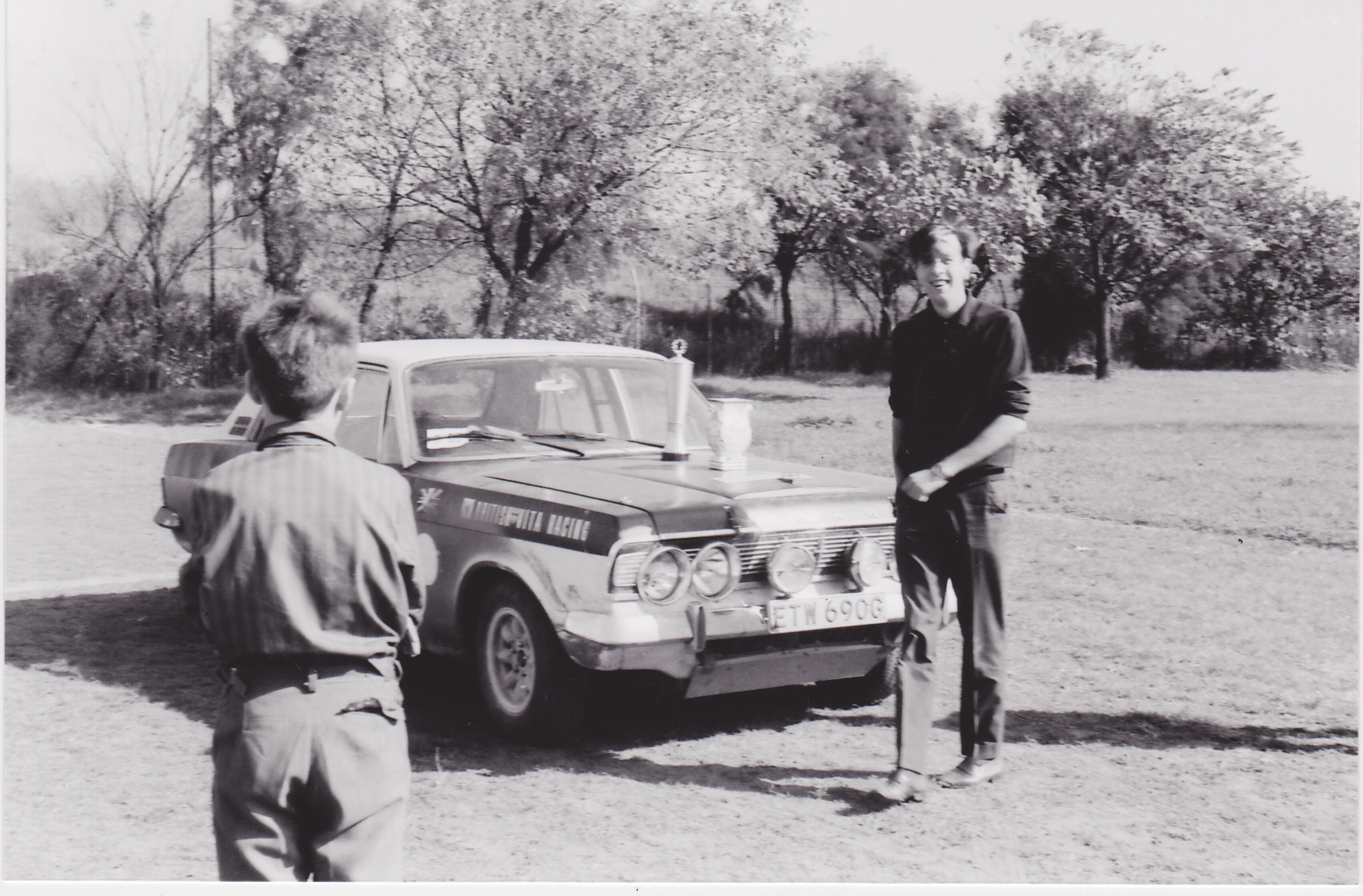 The trophy on the right is a porcelain vase which I rescued from Rochdale a while back. Brian Gillibrand had it as the office ash tray.......

The metal trophy was given to me by Norman 2 or 3 years ago. He had removed it from British Vita for safe keeping."

Below a team photo after the Danube Rally - caption to the right., also from Sarah. Possibly 1965 - there is video at https://youtu.be/55mLBpDd4xk and https://youtu.be/_7d0nMT7nQs.  The second link is particularly interesting for us at about 1 min 30 secs in. 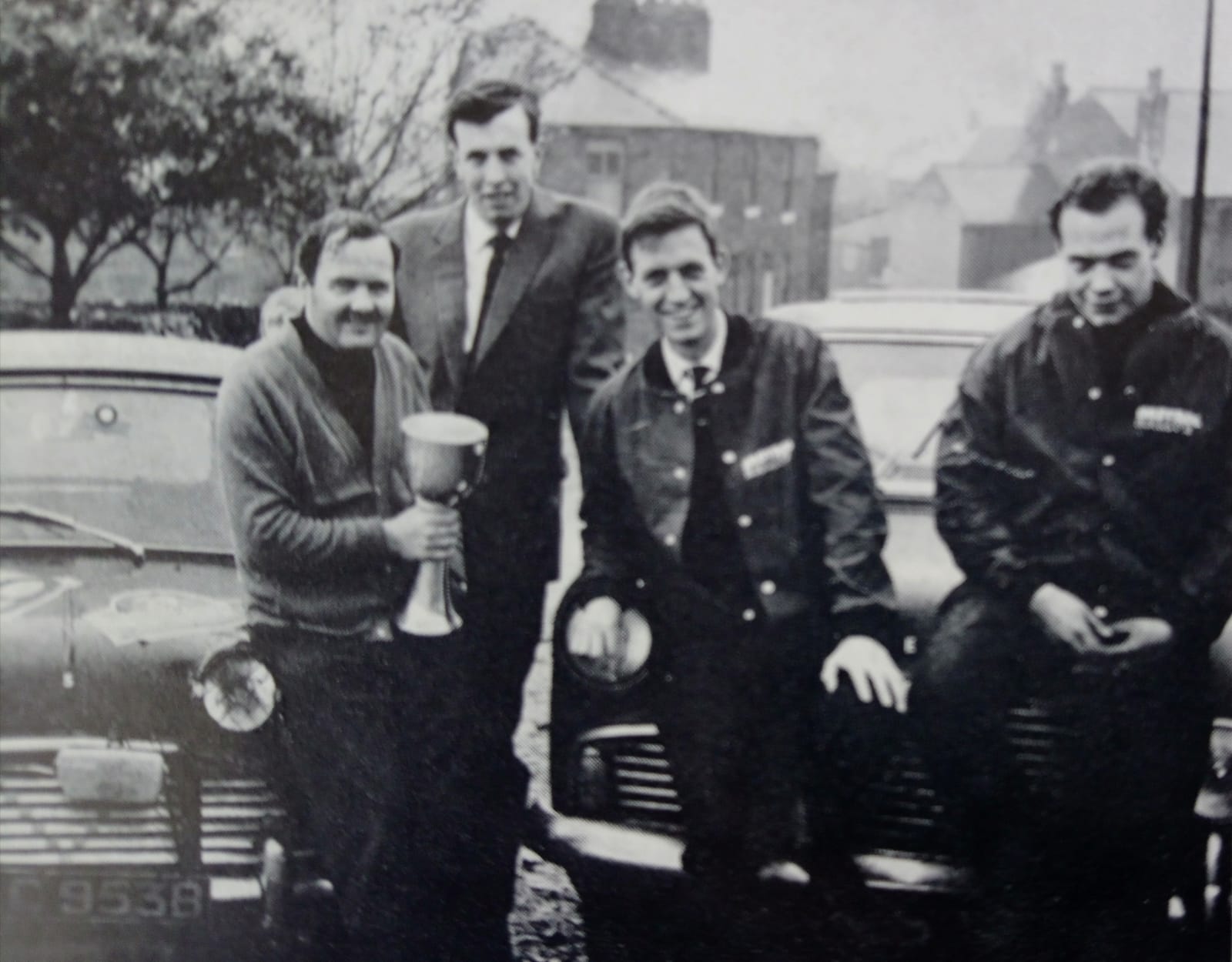 If you would like to add to this tribute with comments, memories or photos of John, please do.  You can use the social media buttons or .