On the Thursday before the event the weather was still fine and warm'ish, but the weather for the Eastern side of the route was looking grim, saying freezing conditions and snow would be coming in and forecasting temperatures between -1 and -4 and light snow but high winds starting between 11.00am and 1.00pm on Saturday.

Route planner Deryck Pickup reports:"I went round the route on Thursday with Ted (Roberts) and it was all totally clear, even Tan Hill. The worst road was Garsdale Head which still had big banks of snow at the sides but was still passable. I came to the conclusion that because nobody lives up there it was probably the last road to be cleared last time, and probably would be again."

It was decided to plan re-routes to be deployed as necessary. Garsdale Head/Dent Station would be easy enough to avoid by using the main road from the Hawes lunch halt, losing only 7.5 miles of route.  Unfortunately prior to that in the morning it wasn't possible to cut out the likely problem roads without using other problem roads.

Deryck: "The solution was to turn right in Kirkby Stephen and use the B road that comes out on the A684, turn left and follow that road into Hawes. Mileage loss 22 miles. So almost 30 miles lost in total. I then did a re-route sheet in case it was needed."

On the day, Ray Dale and Andrew Lord marshalled on the road leading to Leases Ford to hand out a mini re-route around it if necessary, but the ford was fine so was left in. As it turned out, all the route up to Kirkby Stephen was passable. Deryck and Ted in the course opening car set off along the rest of the route, with Clerk of Course Steve Warrington awaiting their phone call should the route be impassable. Come that call, Dave Pedley and Alan Kitson would set up a control on the road coming down into Kirkby Stephen and hand out a re-route sheet. 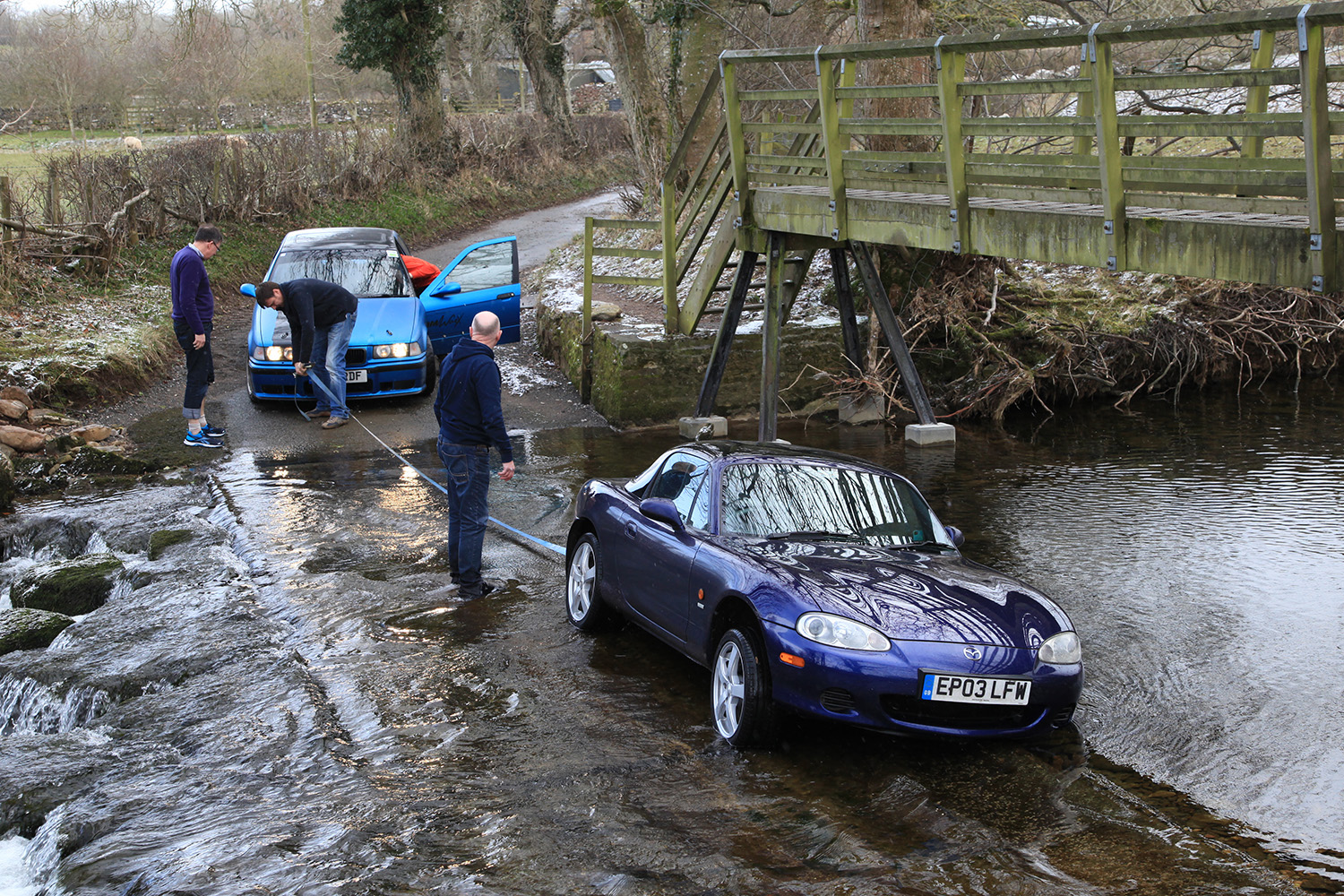 Deryck: "We didn't have any major problems until turning on to the Tan Hill road proper where its a tight hairpin right and a fairly steep hill. It was immediately obvious that this road hadn't been used as much as the others and we we were struggling to keep moving up the hill. Just before the top of the hill there is a farm road on the right - no one had been any further and there was a snowdrift across the road.

We actually got through the drift but when we got on the flat we stopped to have a weigh-up and took the decision it would be irresponsible and so I rang Steve and told him to instigate Plan B. We then returned to Kirkby Stephen to make sure Dave and Alan were there and then went straight to the lunch halt along the re-route to make sure it was OK. -  It was. "

At the lunch halt in Hawes reports were coming in that an MX5 had gone off and drowned out in Leases ford and blocked the route, forcing some crews to find their own way round. Ray and Andrew went down to the ford and towed the MX5 out, so the later numbers didn't have any trouble. (Photo from Dickon Siddall showing stricken MX5.)

Deryck and Ted attempted Garsdale Head and got as far as Garsdale Station before slithering to a halt on the hill, so the second re-route was instigated, after which the route to the finish was problem free.

At the finish, most crews had polished off their fish 'n chips and the atmosphere in Banny's was buzzing - in spite of everything everyone said they'd had a good do - when Jim Porter eventually arrived. It turned out that he did his own re-route around Leases Ford, hadn't gone through Dave Pedley's control and so was unaware of the re-route and therefore stuck to the original route over Tan Hill.  He managed to get over, along with one other MX5.  You can't keep a good man down! (Jim Porter won the Mini Miglia Road Rally in 1971 sitting alongside Roger Clark in an Escort Mexico.) 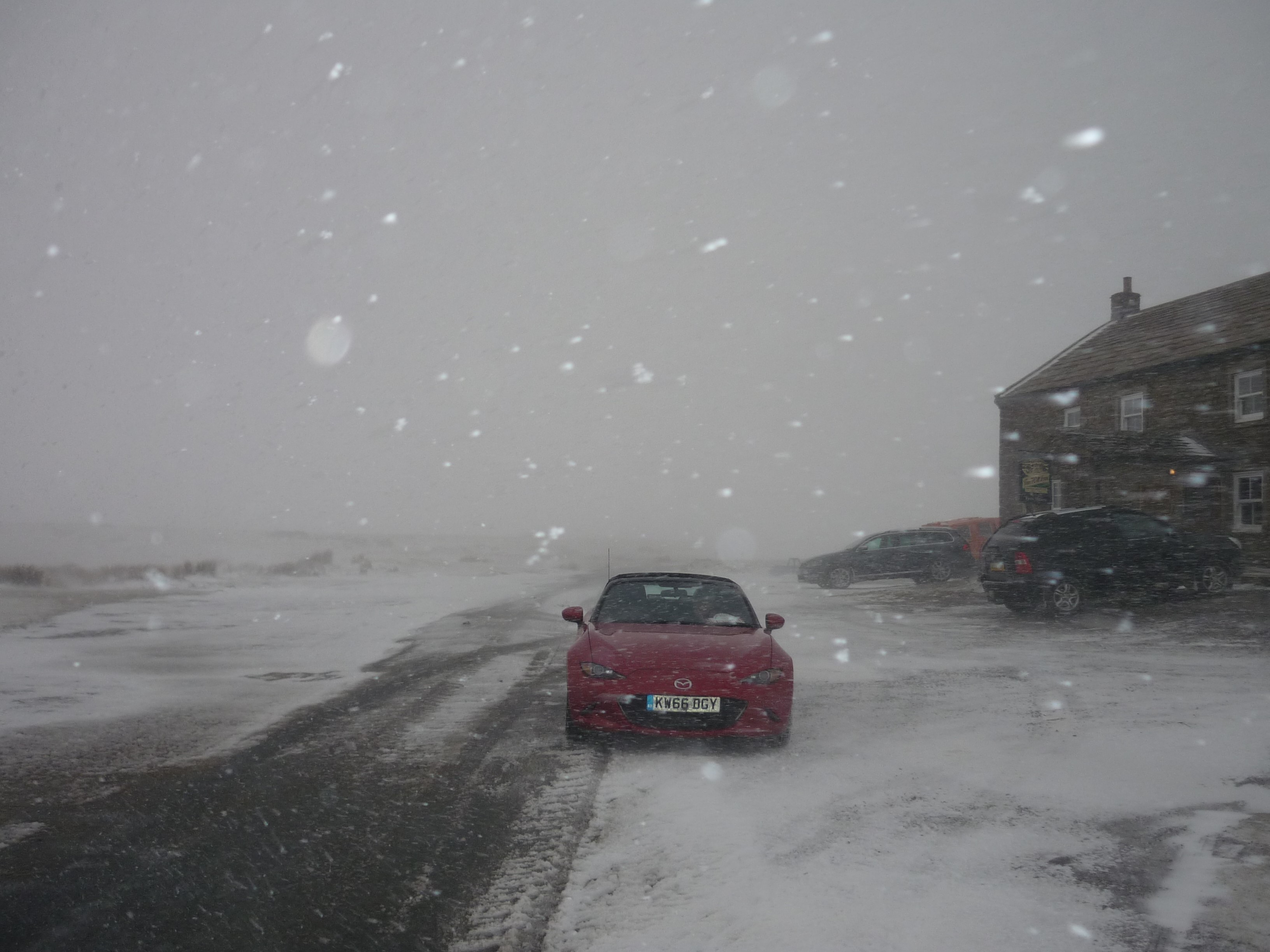 Deryck once more: "I spoke to him at Banny's and he said it was "a bit grim". I think he's probably a master of understatement! He also said we had done the right thing and that although one car on its own could get through, 40-odd cars would definitely have had some problems."  (Photo taken by Jim Porter of his MX5 outside the Tan Hill Inn.)

The driver in the ford (or was it a Mazda?) had to call the RAC because the ECU in the footwell was full of water and it would not run. The RAC man said there was nothing he could do because it would need a new ECU. The crew were having none of this and bid him 'proceed on his way.' They then took off the ECU and baked it in the local farmer's AGA, re-fitted it, fired it up and returned to Banny's, having still had a good time!

From 47 entrants only 3 did not arrive at the start. Out of those one was on call from his work and had been called in, and the other two drivers both still turned out to navigate in other cars. They all deserve a medal for turning up. The driver of the TVR (Roger Lee-Emery) had broken down on the way, managed to get back home and came in another of his fleet!

The next day, Sally Traffic was advising everybody not to travel in the Kirkby Stephen area.

Comments and corections please to